These are the moments captured through the lens

JZ is busy with batting . . . Thank god I have my shades to protect me

Finally . . . The dragon was slayed . . . Buzz was stumped and gone (for the Ethanol )
Posted by Anjana (Sri Lanka) 3 comments:
Email ThisBlogThis!Share to TwitterShare to FacebookShare to Pinterest
Labels: Annual Cricket Matches The annual cricket match of our group is planned to be on 17th of December 2011
Location : Haragama Urban Council Grounds
Pls be there at 8:30 am
We are going to held the special AGM at the location to elect the committee members for 2012.
Entrance Rs 1250.00 for single and Rs 2000.00 per couple

The annual batch trip of our group is planned to be on 29th and 30th of October 2011
Location : Colonial bungalow Dayagama

The 2011 Annual Medical Campaign of Rajans OBU Group of 94 was held in Mailagaswewa Vidyalaya in Galenbindunuwewa on 15th of July 2011.

Getting ready for the big day

The students of Mailagaswewa Vidyalaya will remember this day for ever

Rajans beat St Josephs' to become plate champions in the Milo Under-18 Division I 10-a-side rugby championship 20Milo Under-18 Division I 10-a-side rugby championship played at Longdon place. The most interesting fact is that Rajans rugby team remained unbeaten throughout the entire tournament. Our boys unfortunately missed the opportunity to fight for the cup when the preliminary round match with Science college ended in a tie and they had score more points than us in early matches.

Last year we clinched the cup beating St Peters in the final. 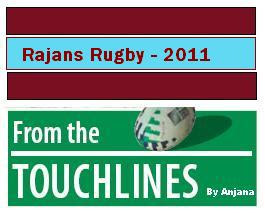 Dharmaraja Vs Kingswood Big Match 2011 (105th Battle of the Maroons)

Rajans Group of 94 celebrated the Big Match 2011 in grand style as Rajans defeated Kingswoodians to claim the trophy putting an end to the 30 years of draws starting from 1980.
KCK batted first and scored 117. Then Rajans scored 169 for the loss of 6 wickets at the end of Day1 and declared. Our bowlers restricted the KCK for 127 for their 2nd Innings and Rajans scored the victories 76 runs by losing just 3 batsmen and claimed the trophy

It was the very first school cricket encounter to be played at Pallekele International stadium.

The batch mates of Rajans Group of 94 @ Pallekele International Stadium

Organizing committee of the Rajans Group of 94 led by Sanjeewa Hulangamuwa put up an excellent plan which made the Group of 94 the most outstanding of all. Most of the colleagues including the KCK praised the organizing of our Group.

The Double Decker - a whole new feature in Big Match

A whole new concept was introduced to the big match by using a double decker to roam in the Kandy city and to get the Group of 94 to the Pallekele grounds. It was filled with Papare music which rocked even the pedestrians in Kandy city. Bus was escorted by our own super Bike gang which was led by Tharanga Gamage’s thundering Honda. In future this will become a mandatory feature in Big Matches in other schools.

The Papare music added an extra punch to the celebrations

The crowd waiting anxiously as two more runs are needed to make history. Dharmaraja college was on the edge of ending the 30 years of consecutive draws . . . and we did it

The moment of glory .. Dharmaraja college defeated Kingswood college in the 105th Battle of the Maroons on 26th of March 2011

The limited overs cricket encounter between the Rajans and Kingswoodians was held on 3rd of April 2011 at Pallekele International Cricket Stadium. Every one expected an easy win by Rajans as they had already beaten the KCK team in the big match just a week ago. But Cricket is an unpredictable game .. Kingswoodinas beat Rajans in this match by two wickets.

Rajans batted first and were dismissed for 168. KCK spent only 8 wickets to surpass this score and won the match by 2 wickets.

We convey our heartiest congratulations to our brothers for winning is game . . . Congratulatioins Kingswoodinas !

T-Shirt
A limited number of special T-Shirts will be available for the Rajans Group of 94 members. Please reserve your one before it's too late.

Our team has played this season 14 matches 1 winning, lost 1 and drawn the rest. But they have led their opponents on the first innings in 11 matches.

The team is coached by former Dharmaraja College cricketer Mr. Ananda Wijesekera with Mr. Sarath Ekanayake as the Master In Charge.

All Island Schools Rugby 7s organised by the SLSRFA is to be played at Royal college Sports Complex on 5th and 6th of March 2011.

The 9th annual Get-together of Rajans OBU Group of 94 was held on 16th of February 2011 at Hotel Panorama - Kandy.

The day Kandy city was flooded by maroon river.

It was the 29th day of year 2011. A very important event for all Rajans was scheduled on this day. At around 9 O’ clock the Rajans Walk 2011 embarked on. It was a river of maroon which overflowed the Kandy city and an unforgettable day for every Rajan.

The Group of 94 also participated in this event.

The brotherhood and the friendliness of our brothers and sisters of Kingswood College, Girls' High School, St Sylvesters College, Mahamaya Girls Collage and all other schools was clearly evident this day as they did their best to treat us with snacks and water. We all are thankful for them for their courtesy and for the encouragement.

The annual cricket match (2010) of Rajans OBU Group of 94 was held on 18th of December 2010 at the Gurudeniya public ground. Some of the moments seen through the lens are below

Donation of an LCD Television to Alma Mater

There was a need of an LCD television to the primary section of the Dharmaraja College. This was revealed during a discussion between the Management of Dharmaraja College and the committee members of our group (i.e. Rajans Group of 94). Immediate action was taken to fulfill the need as members of the Rajans Group of 94 contributed towards this request.

It is not a huge project but it is a very useful one to the Dharmaraja College as the students of the primary section will benefit from it. Rajans Group of 94 expresses their heartfelt thankfulness to all the members and outsiders who contributed to this successful event.

Handing over the TV to the principle of Dharmaraja college Mr. Kerthiratne by Sanjeewa Hulangamuwa and Kosala Jayasinge of Group of 94