Dharmaraja college emblem made from very high quality raw material to international standard is now available for Rajans. Also the circular type double sided sticker for displaying the revenue license (specially for motor cars) is available now. The price of emblem is Rs 500.00 and the sticker is Rs 100.00 Those who interested can contact following members/officials of Rajans OBU Group of 94
Chandima : 0777813120
Anjula : 0777875165
Abeykoon : 0718103700
.
Posted by Anjana (Sri Lanka) 1 comment:
Email ThisBlogThis!Share to TwitterShare to FacebookShare to Pinterest
Labels: Memorabilia

It is the fourth consecutive year we (Rajans OBU Group of 94) will publish the final scores of the rugby matches of Rajans Rugby team. Our intention is not to provide minute by minute updates but to convey the match results to the Rajans Rugby fans all around the world. Indika Basnayake of our group will update this blog post. So check this blog whenever you want to know the results!

Thanks and hail Rajans Rugby

This match was the season opener for the both teams and TCK were the first to touch the line not for the first but for the second time too .. Then it was Trinity's game until that moment when we came back with three back to back tires. At the dying moment of the game TCK scored their last try and they couldn't complete the conversion though it seemed to be not so difficult. The final score was 34 all and it was a draw. That's for the very first time we hold them for a draw
Unfortunately the decisions  of the veteran referee were not so fair as he did not spotted almost non of the TCK fouls.

2. Dharmaraja College Vs Isipathana College (2013.03.26 @ Bogambara)
Rajans recorded their first win of 2013 Rugby season by beating the 7s champions Isipatha by 35 points to 8. We have rewrote the history.

As we analyse the scores it gives an impression that we have won the match easily and we have shown great performance. But for those who witness the match could have seen our performance is not in top notch thus need to pay attention on lot of weak points (fortunately not very harmful in this match). Two of our players were shown "yellow cards". This trend should be addressed immediately or can cause heavy loss in matches with strong opponents. Anyway a day to remember ..

It was indeed a great win for Rajans (21 to 20) in this season but the performance of our rugby team was not upto the expected level. Ball handling was poor and lost a lot of line outs. Finally we had a narrow escape. This is the best time to review our performance and make necessary adjustments before the upcoming match.


We recorded a good win in a clear margin against the Kingswoodians (33 to 24). The referee’s decisions were absolutely not upto the standards, The dying stage of the match was played almost in darkness and the match was played for about 85 minutes. The Kingswoodians could not bear the defeat so they were not present at the awards ceremony. It was not what we all expect from sportsmen as well as students. Last year they refuse to play with Rajans as there was a chance of a defeat. But this season they had no other option but to play against Rajans. Finally they were clearly defeated. We believe that the officials as well as the OBU of KCK should consider this matter seriously and teach them to bear defeat as well as the victory

6. Dharmaraja College Vs Wesley College (2013.05.10 @ CR&FC Grounds)
Rajans beat Wesley by 36 to 24 to remain unbeaten. There was a huge improvement in our skills specially the forwards played a wonderful game and they have shown a dramatical improvement. The Wesleyites played a dangerous game made a lot of high tackles.

It was a nail biting time for everyone as both teams fought equally. At half time it was 15 all and final score was 22 to 20. Dharmaraja college "Rajans" registered another win to be the table leaders.


The SLSRFA has decided to postpone the remaining league encounters which were scheduled for the 08th of June(Saturday) until further notice.

This decision was taken after a series of discussions after the Referees Society withdrew from officiating league games until adequate measures were taken to ensure security of the officials.
The SLSRFR requested the Schools Association to disallow spectators at selected games earlier this week, which was refuted by the Schools concerned. (Source : ThePapare.com)

Rajans secured the title today (22nd June) after Trinity College lost to Defending Champions Isipathana College in a close encounter as the final league game of the two schools in the season was worked off in the hills.

Isipathana College won by 20 points to 17 over favorite Trinitians at Pallekele Rugby Grounds. Dharmaraja College is set to meet Royal College next weekend in the final match for both the teams in the season. Dharmaraja go into the game without the must win pressure.

It will be one of the biggest achievements so far by any schools rugby team to win the Division A title as soon as promoted from Division B.

9. Dharmaraja College Vs Royal College (2013.6.28 @ Royal Sports Complex
Match was a tie. 17 all. After leading 17 to 3 at the first half Rajans couldn't score during the second half but Royal came back strongly and scored 14 points in the second half. Rajans maintained their unbeaten record during the season and became 2013 Singer league CHAMPIONS !

Dharmaraja Vs Kingswood Big Match 2013 (107th Battle of the Maroons)

TThe oldest Big Match of hill capital also known as the "Battle of the Maroons" between Dharmaraja College and Kingswood College was played in 2013 for the 107th time. As one of the most joyful event of all we (Rajans OBU Group of 94) celebrated in awesome style.

The match was played on 22nd and 23rd of March 2013, Kingswoodians won the toss and invited to bat Dharmaraja. First two wickets fell for a very low score leaving the Rajans in trouble. Then the 50 run partnership between Chandimal and Kavindu for the 3rd wicket gave some hope the Rajans. But the Chameera of KCK balled well and Rajans were all out for 133.

Kingswoodians opened the inning with Randika and Dulanjana but they were unable to make a good start as the scores read as 64/4 at the end of day 1. Finally the Kingswoodians managed to score 121 for their first innings and Rajans scored 80 runs for the loss of 7 wickets when the match was ended on 23rd of March 2013 in a draw at Asgiriya International Cricket Stadium

Famous song Senorita by Asela Indrajith De Silva (Chika) was played by himself at our group's big match celebrations while famous actor Sanjeewa Hulangamuwa backing up the vocals. On Drums it is Sameera

Please don't butter me up ! I am sober - non smoker

Rajans batting for their second innings

Dear brothers we have designed a classic shirt for the upcoming Big Match 22 and 23 March 2013. We have also arranged day package (23rd of March 2013) for our group (Rajans 94) which includes at the ground tent, lunch, Papare and boooooze

The whole package is for Rs2000.00 which you can deposit to our groups account 8890010800 (Commercial Bank - Nawalapitiya branch)
Posted by Anjana (Sri Lanka) 1 comment:
Email ThisBlogThis!Share to TwitterShare to FacebookShare to Pinterest
Labels: Announcements (Past), Big Match

The friendly match between Old Rajans and the Present Rajans Rugby team.
The present team won by 55-05

All island inter-schools under 20 seven-a-side rugby tournament 2013 organised by the Sri Lanka Schools Rugby Football Association is scheduled to be held on 16th and 17th of February 2013 at Royal sports complex. The pool is as follows

On day 1 defending champions, Dharmaraja college played against Ananda College and won the match by 24 to nil. The second match was with Wesley College. This was a tough match for Rajans as two players were sent off to the bench and Rajans played with only 5 players and still managed to beat Wesley by 21 to 17.
Some of the action captured through lens by The Papare photographer.

On 17th of February we play against Royal college in the Quarter Final match. And won it by 20 points to 5. Also in this match we had to play with 6 players as one was penalised. It was a tough game to play and with 6 players it was even tougher. Now it's the semi finals. It will be played around 15:30 hrs local time.


Semi Final : It was a close battle against the St Peters and could not over come their strength. Rajans lost it by 12 to 14. At half time it was 5 all.

Finally we came a long way and almost reached the title. This year we are not lucky enough to  be the winners as we did in 2012, but our boys played so well. 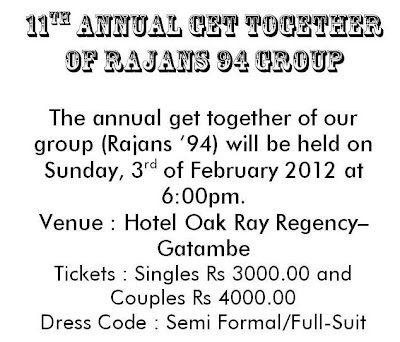